Dr. George Birkbeck, a professor of natural philosophy in Glasgow, held the first lectures for the skilled workers of the day in 1799. He is acknowledged as the founder of the mechanics institute movement. These lectures led to facilities dedicated to workers’ education – the Edinburgh School of Arts opened in 1821 and the London Mechanics’ Institute in 1823. Then, in the 19th century Institutes spread rapidly throughout the British Empire and to other areas such as the United States.

In early 1859, following a public meeting, the Institute was established in the Ballarat Fire Brigade in Barkly Street on the top floor of the Fire Station as a Reading Room.

Local politicians, John Humffray and Peter Lalor (both of Eureka fame), were instrumental in having land set aside for the construction of a Mechanics’ Institute in Sturt Street in 1856.

The foundation stone for the rear section of the present building was laid on Friday 28 September 1860, with full Masonic honours. The Ballarat Star reported:

‘A crowd of 10,000 people attended the ceremony. The Parade included:

By 1868 the Institute required more space and the grand four storey front section was completed in 1869 at a cost of over £6000. Architect was John Holmes Jones. This section comprised:

The reference material for this tour is:  Under Minerva’s Gaze: 150 years at the Ballaarat Mechanics’ Institute.

The Batten Room is the location of the Lending Library and today services our more than 600 BMI Members.

Originally a classroom, in the early 20th century it was
known as the Smoking Room or The Smokery.

The basements were originally intended to provide extra storage areas for fuel and for the establishment of a restaurant.

The Auditorium is part of the original 1860s building. It was designed to provide a large space for the
staging of events.

The Humffray Room was formerly the Institute’s library from 1871 to 1935.

The Sutton Room  was originally set up as a museum and is named after Ballarat Inventor, Henry Sutton.

The research material for your tour has been drawn from – Under Minerva’s Gaze: 150 years at the Ballaarat Mechanics’ Institute (edited by Jill Blee & Phil Roberts).

This reference material is available for purchase at the Library or can be purchased via our Shop.

Generally, tours of the BMI take 50 minutes to an hour. Coffee Tea & Biscuits are served as part of the tour.

As our event spaces are bookable for hire we cannot guarantee access to all spaces but we will work with you to establish your preferences.

The lending library has continuously played a major role as part of the Institute and today services the BMI’s 600 members. For most years it was the ‘Reading Room’ and in 2000 was named the ‘Batten Room’. The first two paid BMI secretaries (and head Librarians) were WH Batten and his son HC Batten. Remarkably between them they served in this position for 92 years – William from 1859 to 1910 and Harry from 1910 to 1951. William had two wives (first died) and 19 children. The lending library is part of the original 1860 building that comprised the reading room and library, office and two classrooms on the ground floor. A large hall, capable of accommodating 1200 people, occupied the upper floor. The building cost around £3400. Today our library has the best collection of crime fiction, mystery, suspense and Scandinavian thrillers in Ballarat and features many Australian authors.

Recent refurbishment works have followed the 1999-2000 Conservation Management Plan of Dr David Rowe of Authentic Heritage Services and Wendy Jacobs, architect and heritage consultant. Building restoration costing more than $5 m. has been in stages. In 2009-10 the Heritage Room was transformed – the Library was shifted next door, a mezzanine gallery area was added (named the Potter Mezzanine recognising the Ian Potter Foundation substantial grant) and the room was upgraded to what we see today where precious stocks of heritage books and journals pre-1960 are housed and available to members for research. Architects were Melbourne’s HBO (Chris Pearce & Lawrie Grant). Notice the unique lantern-light ceiling from the era of gas lighting and pre-electricity.

This room has had many uses over the years. Originally a classroom, in the early 20th century it was known as the Smoking Room or the Smokery (see Under Minerva’s Gaze p 129 for an amusing description from Nathan Spielvogel). Many chess tournaments were played here. The Room is named after Stan Hooper, BMI Secretary 1962-91, who at the same time was Secretary of South Street. In the 1990s through the agency of Dr Frank Hurley the University of Ballarat leased the room and it was known as the University Room. It was christened the Hooper Room in 2000 and was occupied by the Royal South Street Society during 2005-12. It will be the next renovation project for the Institute. 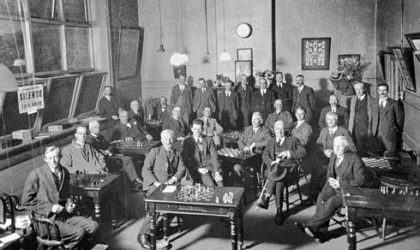 Part of the 1869 additions to the institute, the basements were originally intended to provide extra storage areas for fuel and for the establishment of a restaurant. The restaurant never came into being, as far as we can tell, so one section of the basements was leased to the shop above, while the remainder served as a storage area for surplus books and newspapers. The windows may have been for pavement lights but they weren’t installed. Today the basement has undergone significent restoration works, improving air quality and water inundation. The Board is currently considering the on-going use of these spaces. Why are the windows in the basement?

The drawings for the basement are labelled in the architect’s own handwriting as “Basement” and illustrations and early photographs clearly show the existing entrance arch at street level. So why are there windows? The architect’s plan has the space in the east of the basement labelled “Restaurant” and the section that now houses the newspaper stacks was a kitchen. The room at the west end of the basement was the “Smoking Room” and entered separately though the west stair. The entry to the restaurant was through a stair and door opening off from Sturt Street.

To make the basement seem brighter and not so subterranean it was usual practice in the 19th century to place cast iron grids in the footpath above and then install windows in the room to allow natural daylight to filter through. Reference to these grids has been found in the minute books of the 1870s. The arched vaults at the north end of the basement are actually under the Sturt Street footpath and would appear to have been installed as part of the footing system to support the tall building.

From early minute books it does appear that a restaurant operated from the basement in the 1870s but was discontinued. The street grates probably caused a lot of concern with storm water, dirt and rubbish having to be regularly removed. Letting light in to basements from street level was a general practice and is used at Her Majesty’s Theatre with pavement lights set into the footpath to light the basement toilet areas. In London and Bath you see narrow railed “areas” leading down to the basement with below ground windows. I hope this clears up the mystery for our members.

If you would like to know more about the history of the building you may like to consult the Conservation Management Plan, 2001. A copy is held by the Institute.

The Auditorium is part of the original 1860s building. It was designed to provide a large space for the staging of exhibitions, lectures, recitals, school speech nights and meetings. Originally it was without a stage and this was added in 1873. It was never intended as a performing arts theatre. A major event was held in 1863 when the farewell dinner for Victoria’s second Governor Barkly (1856-1863) was attended by 400 people.

The Industrial Exhibition was the major event of September 1866. Opened by the then Governor of Victoria, Sir John Henry Thomas Manners-Sutton, KCB. There were 147 exhibits displayed and it was reported 250 people gathered in the hall when the Harmonic Society of 110 persons sang the National Anthem and then performed a creditable version of Handel’s Hallelujah chorus.

Mark Twain spoke here on his round-the-world trip in 1895. He was advertised as the Greatest Humorist of His Age. He was quite taken with Ballarat and was amazed at how alike it was to European cities.

By 1920 a bioscope box was installed, and the Britannia Picture theatre seating 670 patrons opened to the public. A highlight was in 1949 when Eureka Stockade with Chips Rafferty and Peter Finch screened. The Britannia was followed by re-named cinemas. From 1955 it was the Odeon and from 1970 the Vegas. Lyric Theatre used it for live performances from 1983 and finally it returned to a cinema for $5 films as the Sturt Cinema from 1994 to 1997. After that it was under lease to the Regent theatre but lay dormant.

The cinema space reverted to the Institute in 2005 and the Board has turned the space into a multi-purpose auditorium which can be used for all manner of public functions and entertainments including the showing of films. On 13 March this year seven harpists played at the SHE concert to a sell-out crowd of 300 people and our fundraising group ‘The Friends of Minerva’ raised $5,000. The final stage of works in 2011-13 have led to the restoration of dressing rooms, a carpeted corridor to the west of the auditorium, a ‘high-tech’ movie projector valued at $110,000 which will project from the rear, six unique Brazilian crystalline lights valued at $40,000, new velvet curtains and a retractable screen. It is set to become a major asset for Ballarat.

The Minerva Space is available for hire > | View our Events Calendar >

The Humffray Room was formerly the lnstitute’s library from 1871 to 1935. In 2000 the room was named after JB Humffray, the Institute’s first president and former leader of the Ballarat Reform League in 1854. He was a leader of the miners and represented them to Governor Hotham in 1854 but as a pacifist he didn’t take part in the Eureka Stockade uprising and the man-of-action Peter Lalor (pronounced Lawler) steeped forward to become the leader of the gold-miners. In 1856 Humffray was the first member for Ballarat East and Lalor for Ballarat West and in that year they secured the land grant in Sturt Street for the Crown Land on which the BMI still stands (gazetted in 1890).

Following the transfer of the library in 1935, the room was leased as a Ballet studio for many years and was also used for badminton and art classes and was finally closed to the public in the late 1980s due to water damage to the ceiling plasterwork. As a result of a grant of $257,000 from Heritage Victoria, the room was faithfully restored during 2004 to its former grandeur and is now be used for meetings, exhibitions, displays and functions such as weddings and social gatherings.

The Humffray Space is available for hire > | View our Events Calendar >

The Sutton Room is above the Humffray Room is currently not opened to the public as it is leased by a financial planning firm Woodward Nhill. Originally a museum from 1869, it then became a Billiard Room and has had a number of other uses. In the year 2000 the roof collapsed and this hastened the restoration works for the BMI. Since 2000 it has been known as the Sutton Room to commemorate Ballarat inventor Henry Sutton. His parents owned the close-by Sturt Street music store. It is said by the age of 14 Sutton had read in the BMI Library every book about Science and it was here that his inventive genius developed. Sutton was one of the first inventors of the telephone, other electronic devices and the motor car but he didn’t patent his inventions and thus often didn’t receive the credit he deserved.